There from The Start. Edwin's war with the horses of the 13th. Battery, CFA. 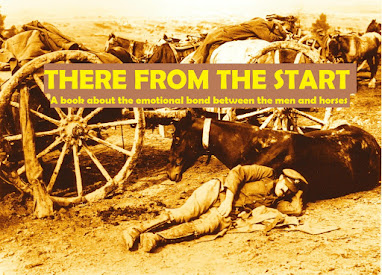 Exploring the emotional bond between the war horses and soldiers in World War One.

My book There From the Start follows the exploits of my grandfather Edwin Clark who spent four Novembers during his 42 months on the western front with the Field artillery war horses. The book explores the extraordinary relationship between the men and the war horses and how they were trained and cared for under horrendous conditions.

The men were devoted to them, spending most of their working hours with them, and they helped sustain the men’s physical and mental well-being by being their confidants, friends and comrades.

Impossible to imagine the carnage.

They were in it together and just as the horses and mules did their utmost to help the troops the men reciprocated by doing all they could to ease their hardships. They fought and suffered together, faced the same dangers, often rested, slept and ate together and ultimately died together.

Edwin received serious injuries in early November 1918 when a bomb was dropped on him and his colleagues while they were feeding and grooming the horses a mile behind the front line. It caused carnage, killing and maiming many of the horses and men. I find it impossible to imagine the awful sounds, sights and smells he had to endure, made worse I’m sure by witnessing the suffering of his harmless equine comrades.

Popular posts from this blog

LEWIS & HYLAND The Forgotten History of a Landmark Store

August 15, 2021
Latest publication   August 2021 Lewis & Hyland, the forgotten history of a landmark store. ISBN 979-8507910199    177 pages with b/w photos, & original newspaper advertisements.  RRP £9.99 Take a step back into an era when drapery shop assistants lived alongside their bosses above the shop and discover the 150 year forgotten history of Lewis & Hyland, Kent's premier drapery store chain which rivalled the fashion houses of London and Paris and was amongst the earliest department stores before the likes of Charles Harrod and Mr Selfridge.  Discover how the staff lived, their relationship with their employers, the long hours and how they enjoyed their leisure time. Using a multitude of sources the author has discovered the phenomenal rise of the premier Kentish drapery chain during its Victorian and Edwardian heydays until the firms demise in the 1980s.  The book is a unique insight into the life and times of an early retail empire and how the modern department store orig
Post a Comment
Read more

Remembering the War Horses and their carers.

November 01, 2021
When we think of the war horses during the remembrance period we tend to overlook the men who risked their lives to safeguard and care for them , particularly while in action at the front. These men not only witnessed the horrors of their human comrades being killed and mutilated but also their equine comrades. My grandfather Edwin Clark was one of these men . Men were often killed caring for their beloved horses. At about 6 p.m. on the evening of the 30 th . September 1918 my grandfather Edwin Clark and his fellow artillery drivers of the 13 th . Battery Canadian Field Artillery were “feeding-up” and watering their war horses at the wagon and horse line a mile back from the front line near the town of Raillencourt. Suddenly they heard an aircraft approaching. It was a German plane and before they could take cover it dropped some newly invented  “Daisy-Clipper” bombs into the middle of the horse lines. They were designed to explode a few inches from the ground throwing
Post a Comment
Read more

When Cats Got Stuck Up Trees

June 09, 2021
When Cats Got Stuck Up Trees ISBN: 978-1479230419  254 pages with b&w photographs.   R.R.P  £6.99 FREE postage and packing when ordering from Bitza Books Free postage on U.K. Orders Only. Non-UK please email us for price. 3 Ways to Order and Pay from Bitza Books:  1.Buy Now  Use the PayPal button at the bottom of the page using   a   Debit/Credit card or with your PayPal account. All payments are secure through PayPal.  You do not need an account.  Books normally dispatched within 72 hours of payment. OR 2.  If you prefer send your order using the order contact form or e mail us direct at   bitzabooks@gmail.com   giving title of book and your shipping address. You will receive a secure PayPal invoice with a link to make payment. OR 3.  You can order from  Amazon books  using this link:
Post a Comment
Read more