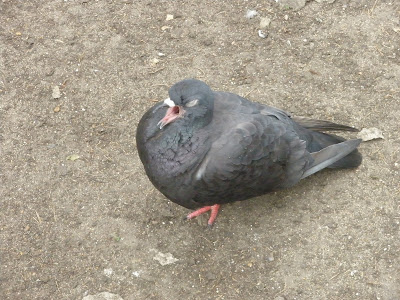 This humorous true short story describes the rescue of a  pigeon trapped in a Leicester Square pizzeria causing mayhem, and the antics of the distraught restaurant owners trying to assist.

It was one of those pleasant warm sunny London Sunday mornings and although my early morning routine had been ruined, I was enjoying a leisurely drive through the virtually deserted north London streets from my base, heading for the West End. I had just received a telephone call from an agitated restaurant owner in Leicester Square, who had a bird trapped in his Pizzeria, which was apparently causing mayhem. Being called out to such unusual situations was part and parcel of my job as an RSPCA emergency service officer in the early 1970’s working for a small specialist unit tasked with coming to the aid of trapped and distressed animals all over Greater London at night and weekends.

I drove slowly up Coventry Street to where it reached the pedestrian only Leicester Square and soon spied the Pizzeria. I got out of my van and retrieved a net and a basket from the back. I strolled across the virtually deserted square towards the restaurant with the net under my arm. Twelve hours previously it would have been alive with noise, bright lights and revelry, the hub of entertainment for London at the time. Now devoid of all the crowds it was tranquil and you could hear the sounds of birds in the trees and my footfall, but unfortunately it also looked so shabby with grimy paving stones covered in flattened chewing gum and the homeless sleeping on the benches along with a few revelers who hadn’t made it home. Council cleaners were just finishing the morning clean up, brushing away the rubbish and hosing down the pavement before the tourists arrived. I reached the restaurant and could see movement inside so I tapped on the front window and almost immediately a small man in an agitated state appeared at the door.

“Cumma in, cumma in,” he almost begged me in a beautiful Italian accent.

I entered and was immediately greeted by the sight of a rather stout red-faced woman frenziedly running around the vast restaurant with a broom held high.

“This is ah my wife,” he explained. “We cumma in this a morning to open up and found the bird in here. It has caused such a mess all over the tables and chairs. We must get it out as we need to open soon.”

He was getting quite distressed and stared at me imploringly, with great expectation on his face, obviously under the false impression that I had a simple remedy to the situation. I stood there net under arm and surveyed the room with a professional countenance not wishing to give away my thoughts that from past experience this could result in considerable devastation to this man’s lovely restaurant. There were indeed a lot of bird droppings scattered about, along with upturned chairs and quite a few feathers gently floating about in the air. I then spotted the culprit in the form of a pigeon perched on a ledge on the other side of the room occasionally bobbing his head in the manner all pigeons do and surveying me with a keen eye as to who this stranger was and what my intentions were.

“I take it that you have been chasing the pigeon around for quite a while judging by the mess?” I enquired.

“Yes we hava. We have kept the front door open and have been chasing it with brooms, but it just flies from one side of the room to the other,” he explained, waving his arms from side to side.

The ceiling must have been twelve to fourteen feet high and the room some sixty feet long. Unfortunately, running all round the room near the ceiling there was a ledge on which the pigeon was now perched. There were also light fittings and wooden trellises adorned with plastic trailing plants that the pigeon could make use of. He continued to peer down at us with a ‘what are these crazy people going to do now’ look on his face. I only had my hand net with me which would not really give me the height or arc of swing to capture him mid-flight so I strolled back to my van for a couple of extension rods. Once back in the restaurant I screwed the cane rods together so that I had a handle some six feet long. The only problem with cane rods is that they tend to bend making the net a little cumbersome. I turned to the man and his wife still watching me apprehensively and impatiently for some form of action

“Right”, I said in a determined voice, “I will have a go, but cannot be responsible for any damage or mess I might cause.”

“I donna care what you do as long as you get rid of thata bird.”

What then followed would have done justice to a Royal Ballet production. I ran, I jumped, I pirouetted and I threw my arms round in vain attempts to get the pigeon into the net. Chairs tipped over, pots of plants tumbled and there was the odd tinkle of broken glass. The pigeon flew from one side of the room to the other, collided with the glass shop-front in a shower of feathers, liberally sprinkled the tables and chairs with droppings in his panic, and cleverly avoided all my attempts to catch him. After five minutes, we both sat panting, me on a chair and he perched back on the ledge. I sat staring at him wondering what to do next and he stared down at me with a cocked inquiring head as if to say “you’re going to have to do better than that mate.”

“It’s no good. I am going to need some help from you,” I said to the now shocked restaurant owners who were standing there mouths open wide surveying the mess. It took them a few seconds to respond.

“What canna we do?” they asked rather cautiously.

“If you can get hold of your brooms again and just chase him around so he cannot perch anywhere, I’m sure at some point, he’ll fall to the ground or fly past me close enough so that I can get him; you just keep him occupied and don’t worry about me.”

This time I climbed up onto a table so that I had more height and reach to swing the net. I then gave my accomplices the nod and they bizarrely hurtled round the room shrieking at the tops of their voices in Italian waving the brooms in the air. I was rather stunned into inaction for a few seconds as I had not been anticipating this bizarre banshee howling, but it did terrify the poor pigeon which was soon flying around in panic. He flew past me a couple of times and I failed to scoop him up, but after a few minutes he started to tire, as did the restaurant owners. Suddenly my adversary landed on the table next to me exhausted, I dropped the net over him, jumped down and grabbed him through the net. There was no applause and I looked up to see my two red-faced and panting helpers collapsed in chairs. I quickly popped him into the basket and once again flopped into a chair. My arms were really aching and I was sweating profusely with all the effort. I thought I might be pushing it to ask for a drink to cool me down so I just exclaimed “I’ve got him!”

The owners only response was to just stare at me dejectedly and then at their wrecked Pizzeria.

“I will take him away and release him. I couldn’t have done it without you,” I said, trying to cheer them up.

“Please don’t release it anywhere near here,” he pleaded, “I donna want him coming back”.

Assuring them that I wouldn’t I left them to their clearing up. As I wandered back towards my van, I took a little detour into the garden area of the square, made sure I was out of eye-sight, opened the lid of the basket and allowed the pigeon to flutter out. He gave himself a shake, gave me a look and nonchalantly wandered off to join his mates apparently completely unperturbed at what had happened to him. 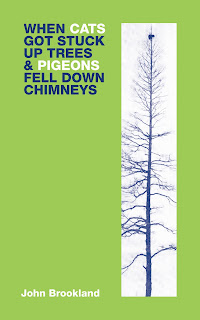 Popular posts from this blog

LEWIS & HYLAND The Forgotten History of a Landmark Store

Latest publication   August 2021 Lewis & Hyland, the forgotten history of a landmark store. ISBN 979-8507910199    177 pages with b/w photos, & original newspaper advertisements.  RRP £9.99 Take a step back into an era when drapery shop assistants lived alongside their bosses above the shop and discover the 150 year forgotten history of Lewis & Hyland, Kent's premier drapery store chain which rivalled the fashion houses of London and Paris and was amongst the earliest department stores before the likes of Charles Harrod and Mr Selfridge.  Discover how the staff lived, their relationship with their employers, the long hours and how they enjoyed their leisure time. Using a multitude of sources the author has discovered the phenomenal rise of the premier Kentish drapery chain during its Victorian and Edwardian heydays until the firms demise in the 1980s.  The book is a unique insight into the life and times of an early retail empire and how the modern department store orig
Post a Comment
Read more

Remembering the War Horses and their carers.

When we think of the war horses during the remembrance period we tend to overlook the men who risked their lives to safeguard and care for them , particularly while in action at the front. These men not only witnessed the horrors of their human comrades being killed and mutilated but also their equine comrades. My grandfather Edwin Clark was one of these men . Men were often killed caring for their beloved horses. At about 6 p.m. on the evening of the 30 th . September 1918 my grandfather Edwin Clark and his fellow artillery drivers of the 13 th . Battery Canadian Field Artillery were “feeding-up” and watering their war horses at the wagon and horse line a mile back from the front line near the town of Raillencourt. Suddenly they heard an aircraft approaching. It was a German plane and before they could take cover it dropped some newly invented  “Daisy-Clipper” bombs into the middle of the horse lines. They were designed to explode a few inches from the ground throwing
Post a Comment
Read more

When Cats Got Stuck Up Trees

When Cats Got Stuck Up Trees ISBN: 978-1479230419  254 pages with b&w photographs.   R.R.P  £6.99 FREE postage and packing when ordering from Bitza Books Free postage on U.K. Orders Only. Non-UK please email us for price. 3 Ways to Order and Pay from Bitza Books:  1.Buy Now  Use the PayPal button at the bottom of the page using   a   Debit/Credit card or with your PayPal account. All payments are secure through PayPal.  You do not need an account.  Books normally dispatched within 72 hours of payment. OR 2.  If you prefer send your order using the order contact form or e mail us direct at   bitzabooks@gmail.com   giving title of book and your shipping address. You will receive a secure PayPal invoice with a link to make payment. OR 3.  You can order from  Amazon books  using this link:
Post a Comment
Read more